Calar Alto Observatory has a new instrument, the PlanetCam camera that, developed by University of Basque Country (UPV/EHU), offers a big spatial and temporal resolution in both the visible and the infrared channels, and that will work at the 1.23 and 2.2 meters telescopes.

PlanetCam UPV/EHU has as its main target the observation of Solar System objects, in particular monitoring the activity of planetary atmospheres. It uses a technique known as “lucky imaging”, which consists on taking several thousand images of an astronomical object in a short period of time and then combine the images in order to build the high resolution image of the object. 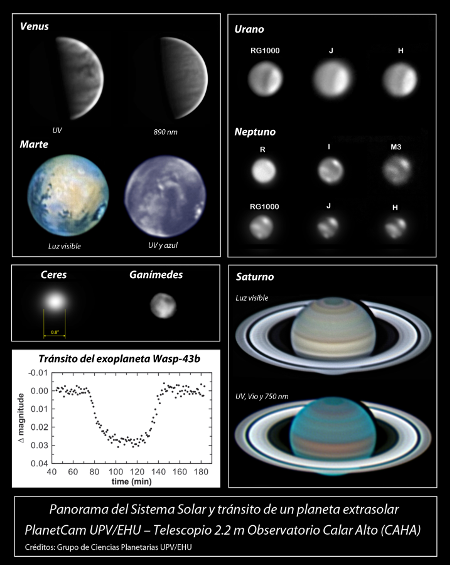 The camera can also be used for observing objects that require a high temporal resolution, as it can work in both channels with speeds up to one hundred images per second. In this way, PlanetCam has observed extrasolar planet transits (the star light decrease when a planet passes in front of it), and gamma ray explosions (very energetic and brief flashes produced by a hypernova explosion or by the fusion of two objects).

“The Observatory is very proud that the group of planetary science at the University of Basque Country chooses Calar Alto for the installation of its PlanetCam instrument. Once more this kind of initiatives are due to the good status that Calar Alto has from the technological point of view”, Jesús Aceituno, CAHA Deputy Director says.

Although the camera utilization corresponds to its owner (the Group of Planetary Sciences – GPC – of UPV/EHU), in its visiting instrument mode at Calar Alto Observatoriy, Agustín Sánchez Lavega, Professor of Physics at UPV/EHU, and Principal Investigator of the instruments, points that “its use can be requested for any other program through a collaboration with the GPC”. 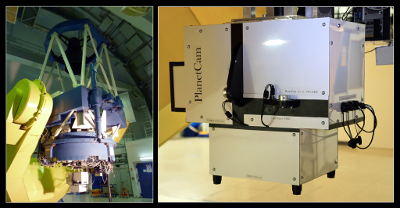 PlanetCam UPV/EHU instrument is a camera that provides images with a high spatial and temporal resolution in the spectral range of 0.38 – 1.7 microns though the use of the “Lucky imaging” technique . The camera can work in two different configurations, one for the exclusive use of the visible channel (0.38 – 1 microns), lightweight and easily transportable and installable in any observatory, and a second full configuration with both channels allowing simultaneous image capture in two spectral ranges, the visible (0.38 – 1 microns) , and the near infrared or SWIR (1 – 1.7 microns). In this second configuration, both channels have installed a set of wideband and narrowband filters for selecting appropriate wavelength for planetary research. The camera operates in any channel with an interchangeable optical system that provide three amplifications, which in the case of the Calar Alto 2.2 m. telescope correspond with a spatial resolution between 0.06 and 0.03”/pixel (visible channel) with a field of view FOV of 108” to 72”, and of 0.13 to 0.09”/pixel (SWIR channel) with a FOV of 86” to 56”.

This email address is being protected from spambots. You need JavaScript enabled to view it.  958230532