Calar Alto Observatory (CAHA, MPG/CSIC) and Azimuth company have prepared a visit for affiliates to ONCE (Organización Nacional de Ciegos Españoles –National Organization for Blind Spanish people), which incises on the need of universalize the outreach. 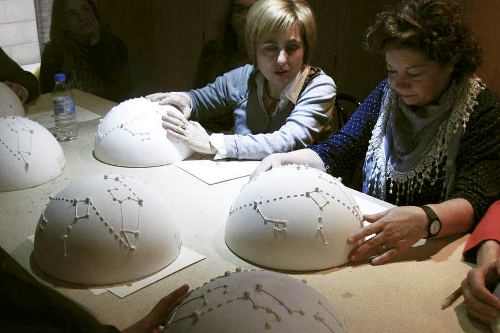 Next Saturday September 30th, Calar Alto Observatory will host an outreach day for visually impaired people consisting in a talk, a sensorial workshop and a visit to the observatory 3.5m telescope. This activity, developed in collaboration with Enrique Pérez Moreno, researcher at the Instituto Astrofísico de Andalucía (IAA-CSIC) who promotes “Astronomía Accesible” (“Accesible Astronomy”) project, constitutes a step beyond in the observatory compromise in order to divulge knowledge for everyone.

Since February 2016, Azimuth collaborates with the observatory carrying out a visit program, outreach activities and astronomical tourism, seeking to bring the research made at the observatory to the society in a didactic and a pleasant way. With the intention to reach the general public, a pioneering activity has been developed in collaboration with Enrique Pérez Moreno (IAA-CSIC): an adapted to visually impaired people visit to a professional astronomical observatory.

The activity will have three parts: A talk about astronomy, a sensorial workshop and a visit to the dome of the 3.5m telescope. The talk, given by Enrique Pérez Moreno (IAA-CSIC) consists in an approach to astronomy and astrophysics, using adapted educational materials. This workshop has been given in several occasions with great success of public, but never in the context of a guided visit to an astronomical observatory.

After the talk, a sensory workshop will take place. In this workshop, Calar Alto Observatory will be presented describing its telescopes and the exceptional observational conditions it has. Finally, a guided visit to the interior of the biggest telescope of the observatory, the 3.5 m telescope, will be carried out. Inside it, the way this telescope works will and the science that is developed with the installed instruments will be explained.